Plasma is the fourth state of matter. It was first discovered by W. Crookes in 1879. When a substance is heated strongly, atomic bonds are broken, and positive ions, together with electrons, form a mixture of ionized gas called plasma. Plasma temperature, like any substance, is determined by the average energy of its constituent particles, and plasma can be represented in the form of two varieties: equilibrium and nonequilibrium.

In equilibrium plasma, the energy of all particles is approximately the same and amounts to thousands and millions of degrees. It is the equilibrium plasma that arises when a substance is heated to ultra-high temperatures. Remarkable, however, is the fact that in order to ionize a gas, it is not at all necessary to heat it up to a thousand degrees. Atomic bonds can be broken, for example, by a strong electromagnetic field. In this case, heavy ions of the substance do not receive significant energy, so the total plasma temperature can be only a few tens of degrees Celsius. If the energy of light electrons and heavy ions differs significantly from each other, then such a plasma is called nonequilibrium. All low-temperature plasma is nonequilibrium.

Low temperature plasma is used in neon lamps and plasma televisions. Recently, low-temperature plasma has found new applications in medicine, disinfection, food processing and water purification. It turns out that a cocktail of active plasma particles has a pronounced antibacterial effect. In addition, plasma can accelerate many chemical reactions.

However, here scientists and engineers have faced significant difficulties. When working with living tissues, strict requirements are imposed on temperature (no more than 30-45 ° C) and density (the effect is achieved only when a sufficiently dense gas jet is used). It is easy to produce low-temperature low-density plasma or dense plasma with a temperature of several hundred degrees (as in plasma welding), but it is very difficult to control both parameters at the same time.

IPLASMA specialists managed to solve this most difficult engineering problem thanks to the development of unique portable nanosecond high-voltage low-temperature plasma generators (NsHV-generator), which opens up fundamentally new opportunities for large-scale implementation of cold plasma technologies in everyday life.

Low-temperature plasma disinfection is an effective alternative to existing disinfection methods. The technology allows you to destroy up to 99.9% of pathogenic microorganisms, including viruses, bacteria, fungi, and other harmful microorganisms. It is effective against multidrug-resistant MRSA microbes, adenoviruses, noroviruses and coronaviruses, with bactericidal, fungicidal and antiviral effects.

The use of cold plasma for disinfection increases the level of biosafety and allows you to reduce costs when disinfecting water, air, food and various surfaces. The technology is universal, it is widely used: 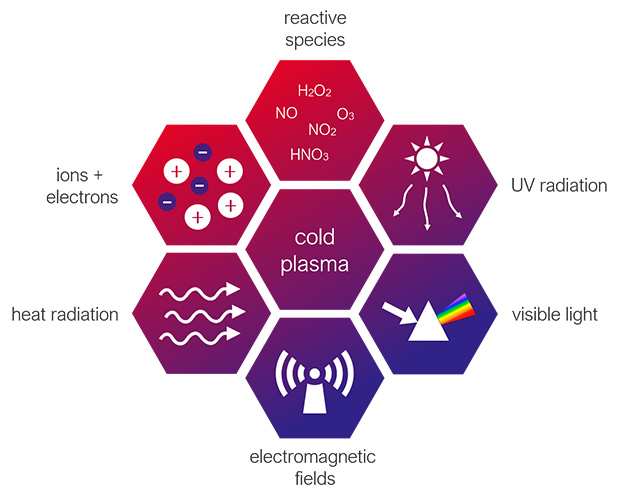 Cold atmospheric plasma is an ionized gas at room temperature (operating temperature about 30-40 ° C). The disinfecting effect is achieved due to the action of electrons, ions, excited molecules and atoms, UV radiation and reactive substances (NO2, NO, O3, etc.) in plasma, as well as in thermal and electromagnetic fields. The effectiveness of cold plasma is associated with chemical and physical processes.

Hydroxyl radicals, active oxidants and other charged particles formed in cold plasma destroy the membranes of microorganisms, penetrating them through membranes. For this reason, cold plasma is effective even against antibiotic-resistant pathogens.

Important: for human and other mammalian cells, plasma is safe even with targeted exposure, for example, for medical purposes, since mammalian cells are eukaryotes, their membranes are much stronger than prokaryotes. 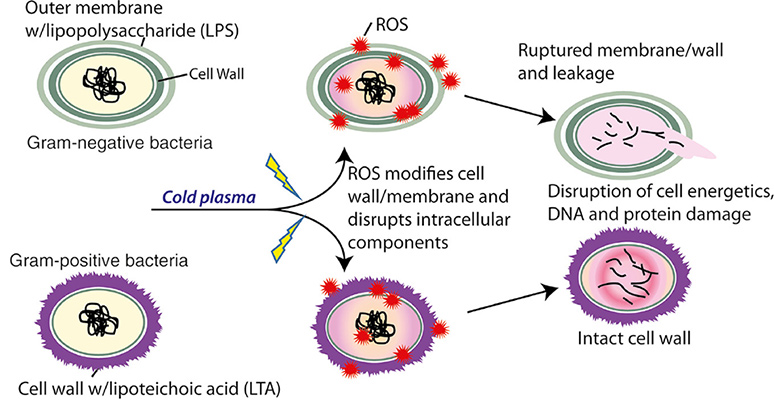 The source for plasma is a high-voltage sheet electrode, a grounded mesh electrode, and a dielectric insulator. When voltage enters the mesh electrode, microdischarges are formed in it, which ionize the air. As a result, low-temperature plasma appears.
How it works in various industries:

Cold plasma disinfection technology is versatile, has a wide range of applications and is compatible with other disinfection methods. Also, disinfection with ionized gas has a number of significant advantages, regardless of the scope and purpose of use:

Low-temperature plasma disinfection is effective wherever biosecurity needs to be improved.